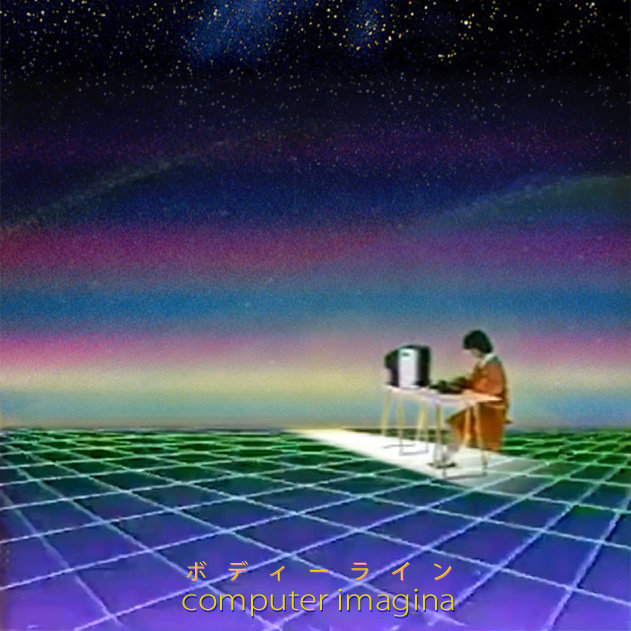 I really have to care about a release to review it multiple times, but there also needs to be a little pull to my give; this most normally manifests itself as an album that gives me something new to think about almost every time I play it. This transcends genre, release year, or any other component about musical enjoyment that I know. And as I might’ve thought, it’s happened to me several times through listening sessions in vaporwave. My time here has been roughly 2013 through the present, but for much time I was figuring out which releases were astounding about one to two years late. New Year’s has just passed and it was 2015, and this free album had ended up onto my screen that looked just like an old screensaver I used to have. Behold what I believe is the moodiest and sweetest cover in all of vaporwave, est. 2013 on Business casual: a shimmering rainbow grid with a blissfully unaware and serenely existing computer user, a perfect encapsulation of the sort of time-flying bliss that can occur when you’re in the digital realm.

Visually stunning but accurate to the activated prism this release’s cover suggests, this music has one of the most vibrant and alluring palettes of any album I know. The structure to this release is simple: lo-fi deskpop hit #1, ambient space reverie #1, repeat three times. 4 songs somewhere between officesoft and late night lo-fi populate the 1st, 3rd, 5th, and 7th track while beautiful, true-to-electronic’s-roots 2nd, 4th, 6th, and 8th songs all connect and conclude this album like a gentle cloud in the nth dimension. It’s one of the only vaporwave albums I listen to daily, usually at night but sometimes in the middle of the day if I need to remember how strong a sound can be. I’ve always purported that this release reminds me of that 1999-2001 period of life and I never really knew why. This album is a celebration to the outer fringe of the metropolitan limits for vaporwave. Try to not find out a little more about who you are to a song like “Evening Wind”, and you’ll see why releases like this are so meant to cling-to.

This was a very early release in the much-active to-date Business Casual label, established itself half-a-decade ago this springtime. This label became a pioneer of the genre thanks to groundbreaking releases such as this one being so early-on acquired. Congratulations to everybody involved in this, incl. b o d y l i n e helps makes the Italian vaporwave scene a proud one & Zobele and BC for doing the same for North America/PA. I listen to it nightly and it’s largely because I think of some aspect of the past newly almost each time I play it. I’ve woken up to “Night Visual” with a dream about my old bedroom from when I was 8 still fresh in-mind, falling back asleep as the release plays on repeat. Few albums evoke such magic and this one has time and time again. Allow it to do the same for you.