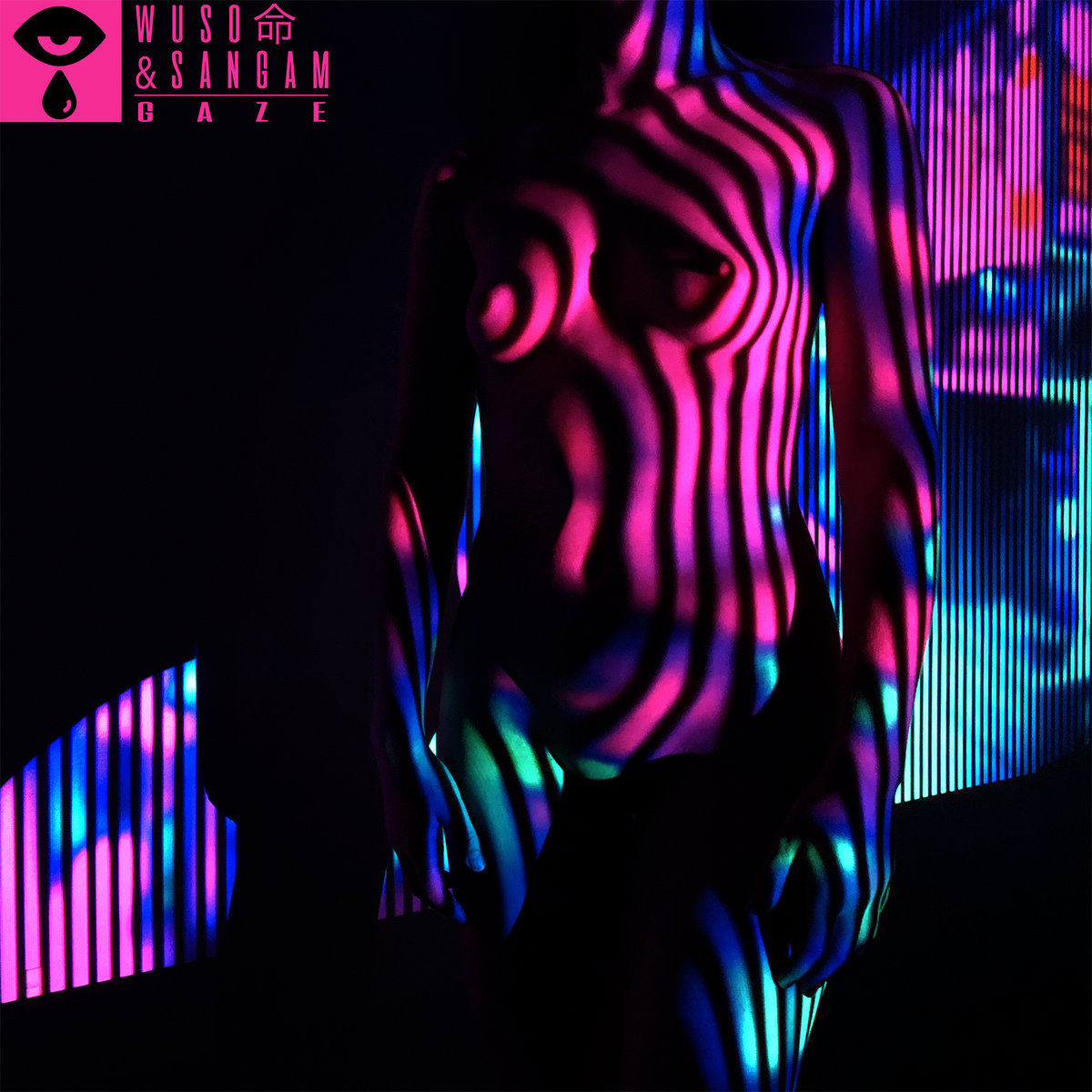 Gaze is the first in an upcoming series of mini-albums from BLUDHONEY RECORDS. This is also the first collaboration between w u s o 命 and Sangam. Serving as a gorgeous introduction to both artists’ respective work, Gaze feels like a prelude to a cyberpunk film. Clocking in at around thirteen minutes, though, this mini-album is short.

The atmosphere of Gaze is almost exclusively awash in thick, gauzy pads, being cut into by sharp and unforgiving synthesizers. In every track there is a constant barrage of rainfall. Everything is neon-lit, sitting somewhere between near darkness and the invading and revealing light of fluorescent color. This aesthetic is furthered by the artwork for the album which with no effort at all sets the tone for what is to come. The artwork is titillating, embodying and engendering those cyberpunk tropes with which we are all familiar.

‘Nightly Blur’ opens the album with decaying drum and synth hits. Its galloping rhythms are tantalizing and are without a doubt its strongest asset. Once the momentum gains, however, everything comes down quickly, retiring to a complacent and bleary-eyed mood. Though the theme here is quite simple it is the album’s most muscular track without a doubt.

‘Desensitized Ecstasy’ opens onto a crystalline piano line that decays openly into the air. Rising synths push upward harshly, forming layered chordal structures. Dissonance emerges because of this but the effect is satisfying, much like a conversation that ebbs and flows. Making up the center of the album is ‘Foggy Gaze’ and ‘Shutter’, two pretty albeit simple tracks. ‘Foggy Gaze’ continues to develop the atmosphere of the album, constructing new tones and dimensions while at it. It is such a shame that the track that gives the album its name is not fuller or longer. The piece itself is satisfactory but its brevity is its greatest fault.

Serving as the final track for Gaze, ‘Blissful Nihilism’ is directed by icy synthlines and the familiar momentum of the album opener. This is a confident closer as its themes lean toward resolve with little happening in the way of new ideas. However, it possesses a gentle and tragic theme that connects the album together nicely.

The cold and lonely neon-lit world of Gaze is not novel. However, within the borders of the vaporwave community, this mini-album demonstrates its value confidently. Nihilism, desensitization, blurring, ecstasy, shuttering: these are varied qualities that make up the world found in Gaze. Though hopelessly tragic, it is as tragic as it is beautiful. The hope that this reviewer has, after listening to Gaze, is that w u s o 命 and Sangam work together again. Perhaps then their respective talents can be utilized to make something fuller and richer than simply a prelude to an idea.