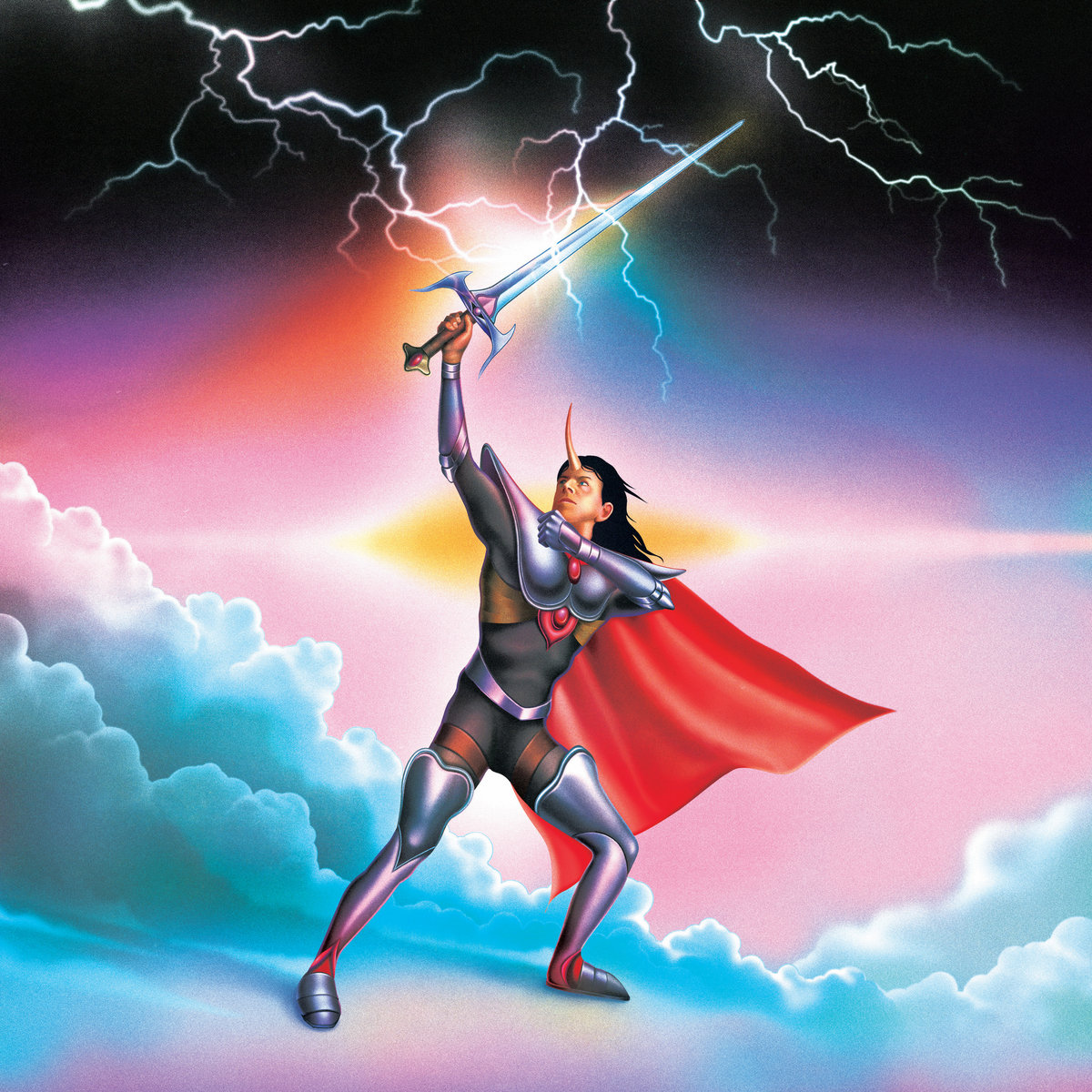 Kevin Hein is not a vaporwave producer. He is a vaporwave artist. His latest LP CURSEBREAKER X, his third under the Equip alias, is a clear statement as to why he should be rightfully referred to as more than a producer. The entire album oozes of creativity and playfulness. It has been out for three weeks now, but I have a feeling this album is gonna be remembered for a long time. In this review I am going to try to explain why I think so.

Based in Chicago, Equip makes original vaporwave inspired by 16-bit RPGs, and has even coined his own simple, yet catchy genre tag to describe it; knightrock. This latest album serves the tag well, as the story revolves around a character (based around Equip himself), in a medieval setting, encountering both external and internal conflicts, involving swords, curses, angels, and demon kings.  And musically, the album rocks really hard. Clocking in at barely 32 minutes, CURSEBREAKER X does not waste any time on filler tracks or dull moments overall. It gets straight to the point, and it is a joyous listen from start to finish.

Our adventure kicks off with CURSEBREAKER X Theme, a truly triumphant and epic entrance for Equip, as we are introduced to an immersive MIDI soundscape, and yes, I notice them too just 10 seconds in; the drums! Incredibly dense and perfectly mixed, they bring to mind the sounds of slamming swords and shields. Equip’s choice of instrumentation is varied and fits well with the medieval theme; plucked strings, choir vocals, bells, organ, flute, (all MIDI-synthesized, of course). The entrance of reverb soaked post-punk guitar adds a little bit of gloom and doom, in contrast with the major key changes, which tells us we have an amazing adventure to look forward to. Things are slowed down a bit for SHOP (New Inventory!), which gives us game menu muzak in its best form. The post-punk guitar has returned, which pairs really well with the chill-out ambience textures, the intricate layers of percussion, and the saxophone. CEMETERY MOONGLOW (in the cold air of the night) was released as the first of three singles from the album.* With a typical 80’s synth-pop chord progression and very memorable melodies, this is indeed the album’s biggest hit. GATECRASHING (Illusionary Angel) is rhythmically dense, using both crystal clear percussion and distorted snares against an airy and ethereal backdrop, and lands nicely in between the previous and the following track. Our adventure continues deeper into NOCTURNE CATACOMBS ( d e s c e n d i n g ), with cold and haunting synth pads in chromatic chord changes. We are also getting deeper into the groove on this track, with a new jack swing type beat and slapped bass. As we reach the second half of the album, MIDNIGHT (t i m e  i s r u n n i n g o u t) is much more sparse in instrumentation, and the pace is slowed down a bit. The dynamic changes and the small breaks of silence is a breath of fresh air in the otherwise very vigorous tracklist.

SHADOW DANCER is a somber, more chilled out counterpart of CEMETERY MOONGLOW, with the melodies more expressive and the overall atmosphere a bit grander. The grittiness of the guitar is slightly changed to a softer tone, as it soars in the background in a higher pitch. Many aspects of this track could be condensed into one word; tasteful. Nothing too overblown, but never boring. On LIGHTBRINGER OBTAINED (Countdown) the synth choirs return, bringing some ritualistic, medieval vibes. The track, which starts off very peacefully reaches an intense climax at the end, where we realize the adventure is soon about to conclude. We finally reach PERFECT HARMONIC CURSEBREAKER (Final Boss), which starts out with mellow chords in an 80’s R&B fashion, but Equip takes over the track soon enough and gives it his own knight rock treatment. It is one of the most energetic songs in the entire tracklist, and surely the track that would most be most appropriate for the dance floor. We also get a nod to the bell motif from the Cursebreaker theme, which is brought back here. LEGENDARY EQUIPMENT takes us back to the game menu muzak, and displays a drastic change in mood from previous tracks. As the imaginary credits roll on PURIFIED, we can finally reflect on what an amazing journey we have had. At 4 minutes, this is the longest track, and to be fair, it could have gone on for even longer than that. This track really reminds you of how Equip is in fact a vaporwave musician. The textures and atmospheres really convey the sensation of ambient-based vaporwave in the best possible way. The melodies are precious, and the percussion is intimate, yet spacey. Indeed, a wonderful way to close an album.

It definitely feels like Equip has outdone himself on so many levels here. Continuing his legacy of creative world-building through music from his earlier projects, I Dreamed of a Palace in the Sky (2016), and Synthetic Core 88 (2018), Equip has now progressed to create an album which manages to uphold a proper concept story.  As Equip mentioned himself, the concept of the album is, aside from the fantasy based story, also about breaking one’s own curses, of which we struggle with in our, sometimes boring, non-fantasy world.** Even without the concept story, CURSEBREAKER X sees Equip delivering a consistent tracklist, as every song on this album is a great standalone track as well. As a whole, CURSEBREAKER X is so much more than an album by one composer and producer. It features an array of talented artists contributing artwork, make-up, music videos, remixes, physical merchandise, with Equip as the creative leader of the project.

Equip has sprinkled his own influences, experiences, and musical proficiency into this album, creating something entirely unique, while still staying true to the vaporwave scene. He manages to encapsulate his own musical taste into one definable and cohesive style, which for the most part stems from the 80’s, albeit from many different places; RPG soundtracks, synth-pop, post-punk, contemporary R&B. Not only has Equip been able to successfully bring his musical from the studio into digital streaming and physical formats, but also to the stage. Equip was one of the most appreciated acts performing at 100% Electronicon in Brooklyn, the biggest vaporwave festival as of 2019, hosted by the legendary George Clanton (aka ESPRIT and Mirror Kisses). The event was timed perfectly the day after the release of CURSEBREAKER X, and Equip went all in on his performance, sporting a cape (in true Rick Wakeman fashion), elf ears and a horn, allowing the audience to become immersed in his own fantasy world.***

No one could predict ten years ago, how vaporwave would sound like, or if it would even be around today. But the fact is, vaporwave is alive and well, and it has never been in better shape. One prime example of that is this album. I believe, and I hope that CURSEBREAKER X will remain legacy as long as vaporwave is remembered.

I'm a music maker and musicology student from Stockholm, Sweden. When I'm not making music or studying it, I'm probably just listening to it instead.