An Interview with Pink and Yellow about the album Never Meet Anyone Again! 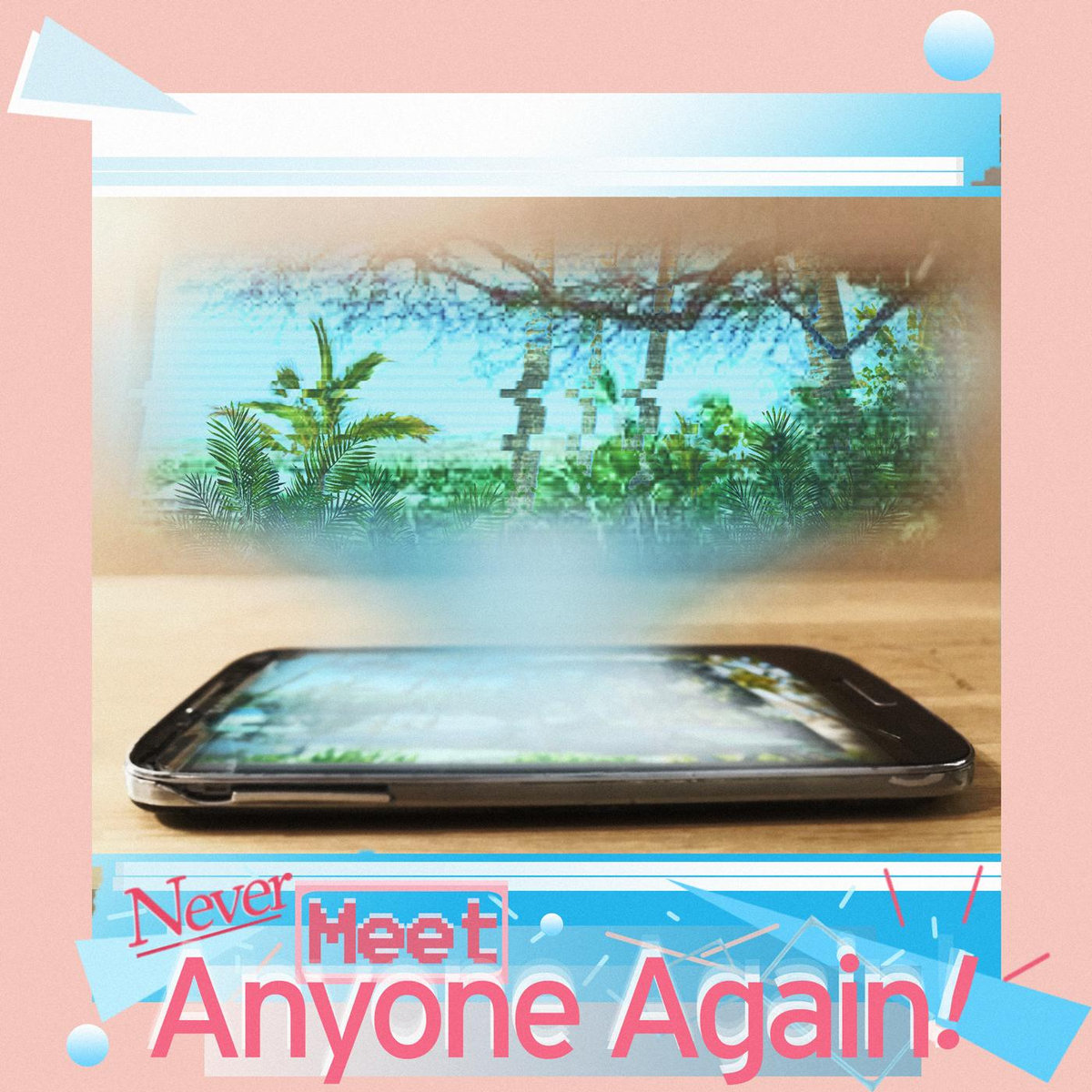 Pink and Yellow’s album Never Meet Anyone Again! was a personal musical highlight of 2019. A labyrinthine work that spirals out into all sorts of generic tangents, blurring the boundaries between bubblegum pop, club music, polyphonic ringtones, progressive rock, MIDI jams and synth-laden reimaginings of metal riffage while maintaining a cohesive aesthetic and a distinct sense of conceptual unity between the nine tracks which are featured on the release. There is a strong sense of world-building on this album, bringing together an often playful tone with a sense of emotional depth to conjure an unnervingly glossy dystopia in which cheerful melodies obscure a sinister undercurrent that is woven throughout.

When asked about the concept behind the album he explained that:

[Never Meet Anyone Again] is a phrase that would grace billboard advertisements and park benches across the world if we lived in a society where being single was a lifestyle addiction pushed on us every day to sell minivans and unattainable dreams, kind of like how marriage and parenting are turned into tropes to sell Dove soap bars and diamond rings. Corporations are shady, shape-shifting institutions that change their image to adapt to the norms of the time, even hire a social media team to shitpost about the banality of daily life so you can feel like chums.

We’re living in a time when a wider conversation is going on about asexuality, consent, and traditional gender roles. Companies are racing to make their advertising more diverse and relatable to a wider audience. I still see these anachronistic car and home insurance commercials that show a time-lapse montage of a couple going on their first date, wedding, honeymoon, first child, the kids going away to college. For me as an asexual, that’s not an effective sales pitch. But what happens when the advertisers realize that asexuality, abstinence, and polyamory are flavors that can be co-opted? “This new Subaru has an extra spacious back seat , so you can drive all your partners around at once. Or you can ride around all by yourself, and look good doing it.” This album doesn’t promise you any of those things, but there was a time when I considered giving the songs alternate endings so you could kind of customize and choose your own fate.

Like most moments of inspiration, the title for the album suggested itself to Pink and Yellow out of the blue, the result of a chance encounter delivered to him by the chaos of the universe as he discussed online dating with a fellow artist:

I had other ideas for the title at first and couldn’t really make up my mind, but I was talking to a friend who said they’d had bad experiences dating online and only wanted to date people they met in real life. They said that they’d like to meet someone in an ‘organic’ way. One idea this gave me was “Organic Visits,” but it also occurred to me that if dating means I have to sit around in smoky bars waiting for strangers to make a pass at me , I’d rather “Never Meet Anyone Again!” It sounds kind of bitter and sardonic but it gave me a serious case of the giggles when I came up with it, so I knew it fit.

It is an album which really manages to tap into the (post)internet condition exposing the heart of human vulnerability that beats at the centre of the cybernetic dreamscape our lives have become. Pink and Yellow evokes a sense of isolation and urgency, infused with the ambient hum of a futile desperation characteristic of a world in which some mysterious force is always tracking our every move and logging off is no longer possible. This clash of extremes on Never Meet Anyone Again! evokes a sense of the frantic ambiguity of performative emotions to which we’ve become so hopelessly accustomed. It is a technicolour world casting long dark shadows in which aggression and overzealous cheer cannot be easily differentiated (and we’re not so sure that we really care).

As Pink and Yellow explains:

I feel like conceptually it covers things from typical internet era alienation to far darker speculative fiction themes like the idea of online dating being an experiment in data collection and algorithm-based eugenics; perhaps a super artificial intelligence is already trying to genetically engineer human reproduction to create the type of people best suited to serve the machines. Perhaps humans never needed each other to begin with and software that lights up the right neural pathways could totally replace the need for social interaction. I’m constantly trying to prepare the listener for a life of total solitude, but I’m there to remind them that there’s no need to be upset about it when there’s a big kidney-shaped pool downstairs and all kinds of other amenities like mini-golf and slot machines. We can also design you the perfect virtual companion. After all, we’ve got your search history.

As conceptual as the album is however, it is something which is firmly rooted in the artist’s own personal experiences on the internet seeking, like so many of us, to reach out through the wires and make a real connection with someone. Such is the case with the album’s second last track Search For Friends Online which drags Kraftwerk-esque synths into the aether riding on waves of deep atmosphere that sink into themselves giving rise to soaring post rock guitars which carry the track to its climactic zenith. As Pink and Yellow recounts:

I just remember so many sleepless nights Searching For Friends Online. Fishing for likes, trolling and starting fights, anything for attention and notifications. Pink and Yellow first appeared as a musical entity on MySpace. Some of my fondest memories (and some of the more exhausting bad memories) I have are of fucking around on forums. I love the instant gratification of it. I had a dream about someone I knew from forums last night. We haven’t talked in years. We live with so many ghosts.

On the whole, this album feels very different from anything that Pink and Yellow has done before. The messiness and rough edges of albums like Lifestyle Addictions (released on Mystic Timbre April, 2019) have been cleaned up and smoothed away.

Where earlier releases relied on unfettered outburst of emotional energy You’ll Never Meet Anyone Again! is precise and carefully considered, full of dense arrangements that prioritise nuance and detail over the thick slabs of gurgling noise that characterised many of his earlier releases. It’s still an emotionally charged album, but in a more controlled way which Pink and Yellow attributes to the recording process itself:

I finished (my previous album) Rosy Retrospection in the summer of 2017 and had it out that August at the latest. I kept working on stuff in FL Studio , which I’d used for everything I made up until Never Meet. Half my VST’s weren’t registered and it wouldn’t recognize my keyboard controller. I was just kicking around samples retreading familiar ground for a few months before deciding that I wanted to do something that had its own world like a video game . I decided to start using Logic Pro and eventually I ended up with a demo of “NeuralNetworkMatchmakingLounge.”

It’s the sound of me figuring out a new DAW from scratch, and having a brilliant selection of synth presets to tweak took things to a whole new level. Much of what you hear is made from radically tweaking the parameters of presets , with a keyboard controller finally giving me the ability to expressively work the filters and parameters by hand. There are songs I worked on every day for months , correcting every little nuance and filling all the empty space with layers. I really wanted to confront the project as a songwriter.

If you listen to any of my older albums , I always had this attitude of just pressing record and seeing what happens. I got a lot of interesting sounds by giving up control of the mix in that way and just adding samples on the fly to a loop I was basically building up and then destroying as I was recording. Never Meet Anyone Again has a really good balance of programmed sequences and late-night improvisations, but I’m improvising on the keyboard and then going back and fixing the sour notes . The way I used to do things before, I would actually record the whole thing straight to the master track. The only way I could “fix” anything on those older records was to leave it on the cutting room floor.

This newfound sense of control is put to very good use to create complex pieces which rely on shifting layers of instrumentation to propel the listening experience forward by building up a big sound that swells into something that is often so much more than the sum of its parts. A great example of this is the track Put Yourself Nowhere, which is Pink and Yellow’s favourite track off the album:

It started out as a two-minute song that had a section where I sang the hook to Blink 182’s “Going Away to College,” but it got more serious and continued to grow into a song with essentially four or five distinct parts. There’s an anger to it, towards the end, a downright aggression that makes me want to get up and trash the place a little. I don’t feel like I’ve ever made anything that heavy. I’d like to take this moment to mention that prog artists such as Tool, The Mars Volta, Can, Kraftwerk and Neu! were a massive influence in my percussion arrangements and textural approach, and I also would like to mention Perrey-Kingsley, Joe Meek, Tangerine Dream, Miles Davis, Santo and Johnny, Dick Dale, Ween, Stephen Hillebrandt and Harry Belafonte.

A list of disparate influences which illustrates the true diversity of sounds that come together to construct an endlessly fascinating and genuinely unpredictable album.