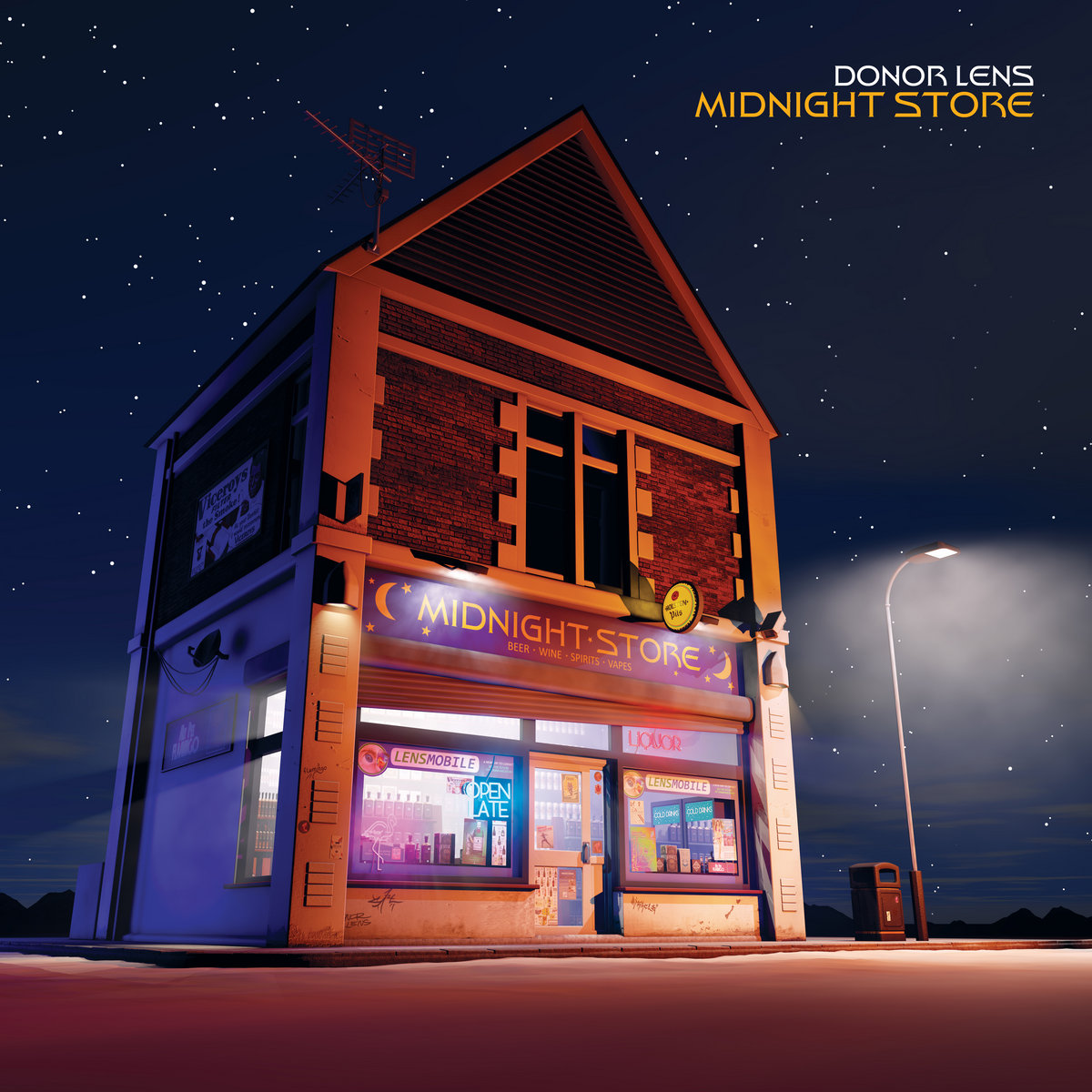 Trading on the atmos of airport destinations for a more unadorned concept, Donor Lens’ sophomore album Midnight Store is a subdued descent into a place where one can get it all. Contrasted with their debut, Miracle Lounge มิราเคิล เลานจ์, Donor Lens has proactively established more of a theme here that is accessible and in step with its central aims. There are moments when Midnight Store reminds me of the trip hop and downtempo stylings of artists I grew up listening to (mostly hailing from Europe).

‘The Midnight Store’ showcases this connection to these downtempo stylings and it is all the better for it. Serving as a prelude, the title track sets a pace for the album in tone as well as concept. Featuring vocals from Jana Tyrrell (who appears throughout), the track possesses a certain quality that is difficult to describe, a quality easily more interesting than the musicality of the track itself.

There are a few tracks present on Midnight Store that did not hold my attention, but that I would also not consider to be poor compositions. At their worst, these tracks betray their function (which seems to be to fill space), and in turn, this strings the album along in unnecessary places. However, when things are good on this album, things are really good.

Take ‘Konbini 24-7’, for example. This track is one that points to why Donor Lens is such a great duo. Developing on a very simple idea, ‘Konbini 24-7’ is superb in its atmosphere and its layering. Weaving in and out between a handful of samples, the track builds to an amassing collage of gorgeous and sterling guitar lines, complete with resplendent synth hits (the sort that absolutely and perfectly manufacture a measured nostalgic response). Carrying the torch of the album and its concept, ‘Konbini 24-7’ is the first track here that feels like something special; something you have always known but have never heard before.

‘Taking Stock’ is one of the most shocking and exciting moments to be found on Midnight Store. Working within the remarkable time signature of 15/16 (a fact I can confirm after reaching out to the artist, having utterly exhausted my own conclusions on the matter), ‘Taking Stock’ sounds like a trip into the mind itself. Its stunning arpeggios intertwine effortlessly with each other, and the mood is melancholy and effervescent. It is a truly remarkable accomplishment. As I listened to ‘Taking Stock’ for the first time, I could swear I was drinking lightening.

‘Another Night Astray’ is the most somber moment on this album, and I love it! The bassline is delicious and the repeating vox from Azeem Shah is reminiscent of Enigma, bringing to mind the wonder of 90s new age music.

Of all the tracks present on Midnight Store with a bold connection to house music, ‘One Stop Shop’ is the best. Its piano line is infectious and immediately puts you in a club in Chicago, in 1992. It’s an interesting choice to develop this sound on an album situated amidst vaporwave content. Though there are a few tracks that don’t quite do it for me, this one connects me to something that I didn’t realize was important to myself.

When I listen to an album for the first time, I commit to moving through it from start to finish without jumping between tracks. This approach facilitates hearing an album as it was intended to be heard, and (I have found) assists in keeping one’s own prejudice at bay.

One of the most surprising tracks to ever grace this community is undoubtedly ‘Spirit Receiver’ which features vocals from DATAGIRL. Lyrically — although simple in nature (the repeating vocal line is “receive my soul”) — it is a dizzying and confounding track given the prior concept established and sustained throughout the album. The point principal of Midnight Store (whatever it is in actuality) may be a critique of consumerism, or of capitalism at large. Of course, this could very well be wrong. Perhaps instead, it is a celebration of these aforementioned subjects, assuming a more postmodern approach.

Regardless of which it may be, ‘Spirit Receiver’ is a mystery. Surprising as it is, I would be remiss if I failed to note just how remarkable this track is. Contextually, it possesses spiritual and religious overtones (which is a welcome change from the fray of content, generally speaking, in the vaporwave community). But most of all, the track is fascinating because it doesn’t seem intent on telling any one story or establishing any basis in nostalgia. What we are left with is a deep and personal moment at the end of Midnight Store.

I am enthusiastic to see just where Donor Lens will take their music and their connection to vaporwave, with its numerous stylistic extensions.